It is not easy to say when Reinout and me first met. We live in the same city and we both work in the creative field. We encountered eachother probably many times before we truly met. So what do I mean with truly met. There was a moment I remember when we recognized a same passion for stories in each other.

It was the day that we shot the first interviews with photographers for BredaPhoto back in 2014. Reinout came to watch the recording and afterwards we evaluated how things went. We both felt the beautiful energy that was present during the interviews. And I remember that we became so thrilled about what we were creating. I think our friendship really started then and there.

Reinout is photographer and one of the curators of BredaPhoto. We worked on many projects concerning photography and the stories of photographers ever since. I remember one particular moment when I went for a meeting in his studio and Reinout made me coffee (which he does very well ;-)) He told me about his photo-project Eboundja. And he showed me prints of the images he made in Cameroon. After all these years of travelling to Cameroon and photographing the transformation of the small village because of the development of a deep sea harbour only 8 miles further south of Eboundja, he was about to create a book of all his work.

While watching the prints and drinking them in (and the coffee), I felt that the story the images were telling me, was a story of people. I saw that Reinout had made very dear friends there. The dearest friend of all being Papa Benoît. At one time when Reinout visited Eboundja, he found Papa Benoît ill in bed.  He had to go to the hospital, that much was clear; but he was too weak to sit on the back of the motorcycle by himself. His neighbour Cecile came to the rescue. She sat on the back, and with a fragile and ailing Papa Benoît sandwiched between them they rode to Kribi. In the hospital they took blood samples for tests. It startled him. ‘What are you doing?’ he asked. He had never had a needle stuck in him in his life.

And then Reinout tells me about Papa Benoîts passing. Reinout says: “Not long before, he had taken me to his native village, Grand Batanga. ‘I want to show you the house where I was born,’ he said. We stood at the door, under a roof of corrugated iron, as I filmed him. ‘You don’t give me gold or diamonds, but love. And for that I want to thank you,’ he said solemnly, his hands folded in front of his stomach. He was emotional. He probably knew he didn’t have much time left. Upon his demise, on my next visit to Eboundja, I visited his grave together with a couple of others. We made a gravestone that held a small cavity. In it we placed the portrait I had made of him that day in Grand Batanga.”

When I told Reinout about the creation of Storybook it was our mutual idea to bring in photographers that all at one time have exhibited their work at BredaPhoto. And to see if it would be possible to launch Storybook at BredaPhoto in September 2022 when BredaPhoto celebrates its 10th edition.

And now, many months later, very special photographers said yes to being part of Storybook. And one of them is Reinout. And Papa Benoit is also there.

While writing this and remembering the lifefragments we exchanged, it touches me again. Thank you Reinout.

Please check the website of Reinout to see more of the Eboundja project and his other work: www.reinoutvandenbergh.nl/projects/eboundja 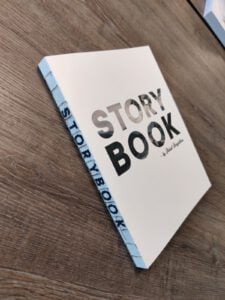 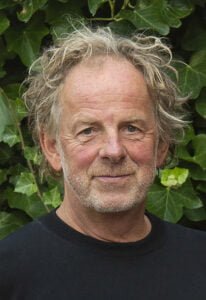 Since 1982 he has been established as photographer and audiovisual designer. His art work has been exhibited in various museums in Eastern and Western Europe and Africa and published in various books and publications. In all his work he tries to combine subject matter with human interest and interaction. "I am fascinated and inspired by daily recurring events in the lives of ordinary people; how they live, eat, drink, work, sleep, dream and love."

Since 2007 curator of the BredaPhoto international photo festival.